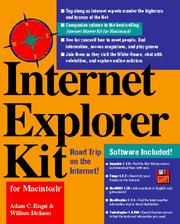 Published 1994 by Hayden Books in Indianapolis, IN .
Written in English